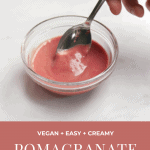 This Pomegranate Vinaigrette Marzetti style dressing is made with only a handful of ingredients. Perfect for drizzling on your fall season salads! It’s raw vegan, soy, nut and gluten free! Everyone will love it.

My 3 year old loves pomegranates. She enjoys everything from picking the seeds out of the skin to eating them one by one. A pomegranate can keep her busy for an hour, which is even longer than her favorite toy.

In order to placate her I’ve been buying pomegranates when ever I can find them. They’re hard to find in the supermarket even when they’re in season. But they’re worth searching and waiting.

I’ve always enjoyed eating pomegranates plain or using them as a colorful garnish but I never cooked with them. Finally, I decided that I needed to capitalize on the sweet and sour flavor of this awesome fruit! So I came up with this pomegranate vinaigrette recipe!

The first time I tried it was from the pomegranate vinegarette Marzetti makes. It was dressed on a salad my friend served me for brunch. When I asked for the recipe she pulled out the vinaigrette by Marzetti and showed it to me. Since I prefer making Homemade Salad Vinaigrette I decided to come up with this recipe!

After spending many rounds perfecting it, I’m excited to share it with you! Just in time for Thanksgiving.

How to Make Pomegranate Vinaigrette

Step 1: Deseed the Pomegranate. This is the hardest part of the recipe. If you’re in a rush you can purchase pre opened pomegranate seeds if available. Whole foods often carries them. For a detailed guide on opening a pomegranate check out this video.

First fill a large bowl with warm water. Then slice the pomegranate into smaller wedges. Then using your fingers place the pomegranate under the water and dislodge the seeds from the skin. The seeds will fall to the bottom of the bowl and the skin will float to the top! Use a slotted spoon to scoop out the skin and drain the bowl to harvest the seeds.

When Are Pomegranates in Season?

Most pomegranates grown in the United States come from California. They’re in season from late September to December, making them perfect for holiday cooking. In recipes such as in this Fall Harvest Salad and garnished on this Curried Carrot Ginger Soup with Sweet Potatoes.

How to Know When A Pomegranate is Ripe

Pomegranates are notoriously hard to read. Most people aren’t familiar with them in the first place, let alone know how to pick a ripe one. The principals for picking the perfect fruit are similar to those of other members of the citrus family.

How Long Do They Last?

Pomegranate: You can use pomegranate juice instead but it won’t be as creamy

Mustard: Any type of mustard will do

Maple Syrup: You can use any type of liquid stevia such as agave and honey. I love how this dressing Tates with honey but kept it out to keep it vegan. 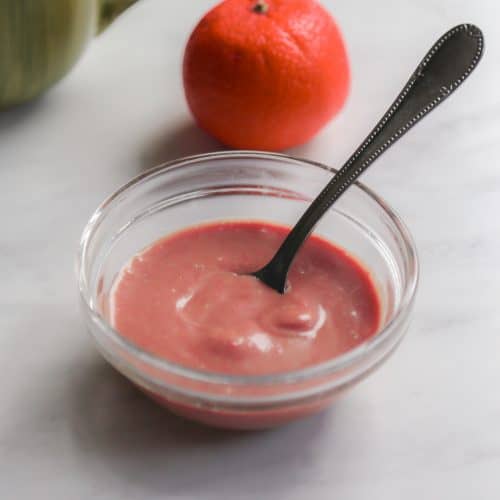 ☀️☕️Three healthy drinks that are the perf

🥗Three healthy salads perfect for any meal by @

47shares
Subscribe Now To Discover how to look & feel great by healing your gut!